CATONSVILLE – Angela Conti has her room picked out in the Little Sisters of the Poor’s wing of St. Martin’s Home for the Aged.
A Glen Burnie native who until recently worked in the social services office of St. Martin’s Home, Conti, 23, plans to enter the Little Sisters as a postulant in October.Her vocation bloomed at St. Francis University in Loretto, Pa., where she earned a degree in social work in May 2014. Conti had planned to wait five years before pursuing consecrated life, but God, she said, had other plans.

Last October she approached Little Sisters of the Poor Mother Superior Joseph Caroline Beutler for entrance into the order. 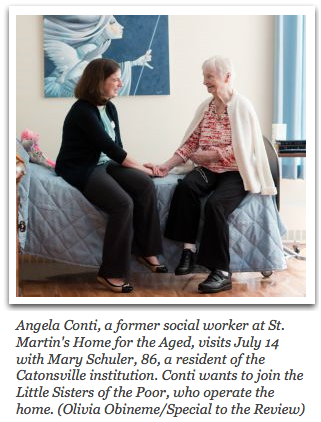 “Everything just resonated for me,” Conti said, “especially the care they give the dying. I knew I wanted to be part of this mission.”“She’s so very happy,” Mother Joseph Caroline said. “What a great grace God has given to another individual, to be a Little Sister and serve the elderly.”

Conti’s path started with the firm decision that the Little Sisters’ charism was not for her. As a student at Glen Burnie High School, she had found a longing to know Jesus and serve others. During a vocations event at the end of high school, she met with two Little Sisters and discussed their calling to serve the elderly and poor.

“I remember the encounter and not wanting that,” she said. “It really took going through college and working with the elderly to change my mind. My senior year, I did an internship with a hospice agency. This was life-changing, being with someone during their last moments. That was something I knew I wanted to do; I wanted a way to live that out.”

In college, she went back and forth with the desire for religious life.

“By my junior and senior year, I felt this is what the Lord was calling me to,” Conti said. “I fell in love with Jesus Christ. It was as simple as that."

The way opened when Conti sent a resume to St. Martin’s Home in April 2014. Called to interview for an unposted position in the social services department, she landed her first job after graduation.

Conti visited with the sisters and participated in community prayers. In October 2014, she said she knew this was the community for her.

“It was a wrestling match with God,” she said. “I thought I was saying ‘yes’ but it was ‘my way.’ He was calling me to surrender. I thought this work was too much of a sacrifice. That’s what God is calling me to, a life of pure charity. After that, I was no longer afraid. It became home for me.”

As part of her preparations, Conti is paying off her college student loans, approximately $100,000. Because the Little Sisters take a vow of poverty, postulants must enter loan- and debt-free.

A recent karaoke night at Holy Trinity in Glen Burnie, Conti’s home parish, served as a fundraiser toward that end. A third-grade class at Our Lady of Perpetual Help School in Ellicott City sent her money, and the poor box collection one weekend in May at St. Ignatius in Hickory also went toward her cause. She has a GoFundMe page: “Until There’s Nun.”

An unnamed benefactor has pledged to match donations for Conti, with any additional funds raised going toward other women who want to enter the order but are hampered by student loans.

“I’ve seen such generosity from people,” Conti said. “It makes it become possible.”

“She just portrays Christ’s love that she’s found to others,” Mother Joseph Caroline said. “Her response is overwhelming joy. She’s taken an active part with the sisters. The residents are proud of her, too. Her postulancy will be here. She’s already picked out her room.”

Conti, who is taking time between now and October to spend time with family and friends, said their excitement equals hers as she prepares to enter the Little Sisters.

“When I started telling friends my news, they’d scream and react in the same way as if I told them I was engaged,” she said. “It’s been really neat and humbling having everyone behind my back.”