Learn about the history of our work

Since 1869 when the first home of the Little Sisters of the Poor opened on Calvert Street, an estimated 15,000 elderly men and women of all backgrounds and with very limited financial means have found a home with the Little Sisters in Baltimore. The Civil War had barely ended when on April 6, 1869 five Little Sisters of the Poor arrived from France to begin the fourth foundation in the United States. They were welcomed by the Visitation Sisters who provided them with many of the practical items needed to begin their work of caring for the aged poor.

The next day, a Wednesday, they moved into two small rented houses on Calvert Street. The poverty was great, but the generosity of the people of Baltimore was greater still. A year later, they moved into a new building on Valley Street not far from Johns Hopkins Medical Center, where they would stay for 100 years.

In the mid 1960’s, funds were successfully raised for the construction of a then state-of-the-art home for the aged in Catonsville, dedicated under the patronage of St. Martin of Tours. This name was chosen in honor of Archbishop Martin J. Spalding who first welcomed the Little Sisters to Baltimore. It was during their centennial year, on May 25, 1969, that the Little Sisters moved into the “new” St. Martin’s Home, originally designed for 240 aged persons. St. Martin’s Home also serves as the provincial residence for the Baltimore province of the Little Sisters of the Poor. Currently, nine homes in seven states and the District of Columbia, comprise the province.

From the small beginnings back in 1869 right up to the present day, we have never wavered in our desire to humbly and joyfully live the charism of our foundress, Saint Jeanne Jugan, who said: “Never forget that the poor are Our Lord.”

For more information about Saint Jeanne Jugan and the Little Sisters of the Poor, click here. 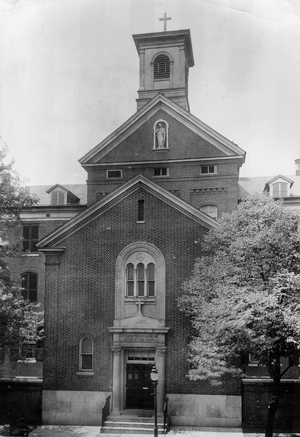 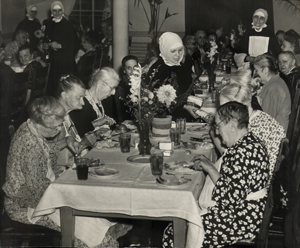